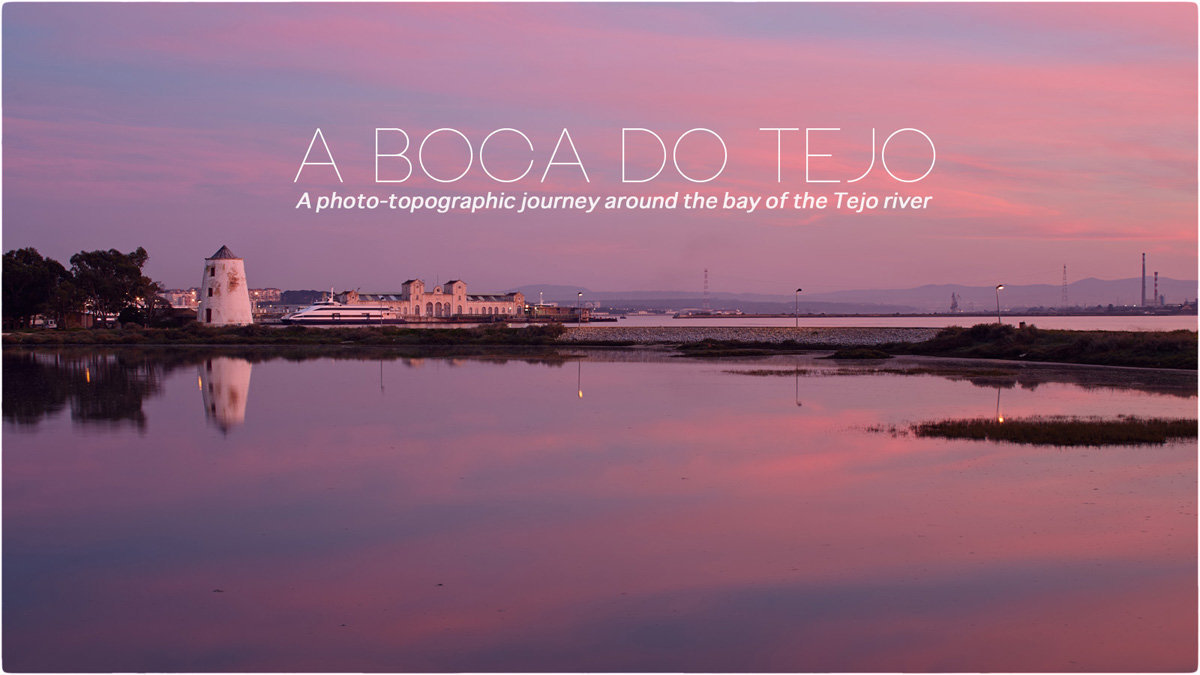 this photographic essay wants to offer you a visual journey along the bay of the Tejo river. It is also a way for me to mark a point, along my personal journey as a photographer.

In the fall of 2013 I came up with the idea of producing a documentary body of work – consisting in a limited number of images about a specific territory, taken along a fixed time frame – in which I could express all the instances that I had to leave in the background, during the last ten years of work as a photo-journalist. In particular, I was looking for method, linguistic coherence and singularity.

Lisbon has been in recent years one of the most photographed cities in the world, especially by growing hordes of tourists, that seem to like to snap pictures of their faces, with the bay of the Tejo in the background. But even for those who live there, as I did for the last two years, the territories and the communities that share the bay with Lisbon tend to remain somehow in the background. I was curious to see how the bay looked from the other sides, and how the rest of the territory interacted with it.

The bay of Tejo is a mirror of water that separates the mouth of the river, some 40km east of Lisbon, from the Atlantic ocean, about 20km west. Due to its relatively small size, one element that I assumed the whole territory would share is the quality of the light.
Some say that the “magic” bright of Lisbon comes from the shiny azulejos that cover the typical houses, while others argue that what make the difference are the white blocks that pave the streets in the old town. Both arguments make sense, but I am convinced that the true source of that rather unique lighting lays outside Lisbon; and that is the bay itself. I hope this work will count as an argument in favor of this theory.

Besides that, having always been fascinated by maps and topography, my guess was: how much of the shape of the bay, as it appears on the maps, can actually be perceived from the ground? Or, in other words, can I find a relationship between the lines on the map and those in the real-life perspective? So I tried to create a visual route that somehow echoed the experience of reading a map. Which as I saw it meant basically: following lines and getting a constant sense of scale. The scale issue led me to choose to photograph the entire series with the same lens, in order to represent distances and sizes in a constant way. While regarding the lines, I was photographing the mouth of the Tejo: so I assumed that the southern and northern margins of the bay were the lips, and I started searching for places where I could get the two edges in one frame.

The main variable I had to take into account is that the shape of the bay is never still. The coastline is always drifting accordingly with the tide, radically changing its appearance. Of course, rooting inside the metaphor, the mouth of the river is breathing. Twice a day.
Then, one after another, I learnt to recognize many other rhythms that unite the environment of the bay as a whole organism. Such as the times of the public lighting, the pitch of the traffic of vehicles and boats, the working times of factories, plants and mines, and the routines of large communities of birds that spot various venues of the bay, looking for food where the tide is low, for sun and protection.
In most cases, all these processes can not be found on a map, as maps are generally meant to sum up informations that are relevant for travelers.

One of the fathers of semantics, Alfred Korzybsky, used to state that: “The map is not the territory”. By which, he meant that we can only get in contact with the world by means of our representation of it, and that outside that, we have no direct access to reality itself.
So the map is not the territory, because there is an infinite gap between what I know is there, and what happens there. However, luckily enough, this does not mean that our experiences are necessarily empty. Although they could be, whenever we give up our right to challenge and expand our representation of reality.
The way I tried to do this has been by creating images packed of ephemeral data, although all framed in the exact point in time and space, when all the elements involved briefly came together into a synthetic perception of form. Which we may call Gestalt or simply beauty.


As I wrote in the introduction, this project was limited in time and size. I gave myself six months – late autumn, winter and early spring – which allowed me to get a relatively broad variety of atmospheric conditions and different angles of the sun.

As for the size, I located a number of vantage points on the map, in order to include all of the margins of the bay. That gave me a number of 22 locations. So I estimated that the final portfolio had to be between 25 and 30 pictures. Then I started scouting each of those slices of territory, until I figured out under which conditions I wanted to photograph them: the position of the sun, the level of the tide, wind, visibility, public lighting and other contingencies. Of course, fancying the ideal conditions is easy, actually getting all them happening at the same time is much less so. In this I was helped by some great – and free – digital tools, such as Google Maps, Street View and the community of Panoramio. By Accuweather, Tide-Forecast, and by the indispensable The Photographer’s Ephemeris. Still, it took me more than eight thousand kilometers traveled and roughly as many photographs taken before I got them all, the way I wanted. Here, as the method is concerned, I admit that in some cases my initial whish-list proved wrong. So, after six or seven unsuccessful trials, I had to change my mind and make up different choices.

There is one last element I’d like to clarify. It is a bit technical, but I want to include it in this introduction for the sake of transparency. As indeed, it has to do with glass. I referred before to the fact that I used one single focal length, in order to maintain a sense of distances and proportions along the journey. That choice is also meant to enhance the illusion of a real experience for the viewers, hopefully consolidating image after image in the final editing. In specific I chose a 45mm lens because it provides an angle of view quite similar to that of the human eye, and does not show the amount of perspective distortion [1] that comes with wide angle lenses. With the same purpose I also decided not to use any kind of filter: whether neutral density, graded, polar, or colored. I did this in part to avoid temporal distortions (as it happens with NDs) and mystifications in general, but also to raise a point against some expressionist mannerisms that I see spreading in landscape photography. Another tool that I used to enhance the illusion of real experience for the viewer, is a combination of movements of the front element of the lens that is called shift and stitch.
The first one, shift, allows to raise or drop the horizon from the center of the frame, without affecting the vertical lines as it would happen with a normal lens. While the stitch is about merging together two images with a different grade of shift. In this case, expanding the original format of 3×2, into a 4×3. This means getting a wider angle of view, while maintaining the same perspective distortion, or compression, as before [2].
Ideally, the combination of this two techniques should trick the eyes with a sense of enhanced tridimensionality: a slight illusion of the background getting closer or of the beholder falling into the image.

I wish you a safe and pleasant journey.

[1] Here by perspective distortion I refer to extension distortion, as opposed to compression distortion. Being the former an optical phenomena typical of wide angle lenses, the latter of telephoto lenses. Extension distortion means that the close objects appear abnormally large (relatively to the average human vision), while distant ones appear abnormally small.
[2] In other words, the horizontal angle of view remains the same, 44°, but the vertical changes from 30° to 33°. So, the diagonal -which is the one that define the actual angle of view of a lens – changes from to 51° to 55°.
All content © Naoki Tomasini 2015